The programme, which is a combination of MYJobs@Wilayah, MYGrocer@Wilayah, MYSchoolBus@Wilayah, MYMedic@Wilayah and MYFood@Wilayah, was officially launched Sunday (Jan 31), in conjunction with the Federal Territory Day on Monday (Feb 1).

“The government is continuing efforts to reduce the cost of living and to provide social protection programmes that are comprehensive to ensure the poor and those with low income are not left behind in our nation building,” he said in his speech.

He said with the National Income Poverty Line rising to RM2,208, more than 400,000 households fall below the poverty line.

“To manage this, the Federal Territories Ministry, via MYJobs@Wilayah, has provided 3,259 jobs in the city, which is 28% more than the original target. This initiative involves several sectors and industries,” he said.

The MySchoolBus@Wilayah, he said, has aided 9,704 students in 67 low-cost housing areas whereas the MYMedic@Wilayah programme offers free medical services to the poor in low-cost housing in Kuala Lumpur.

Meanwhile the MYGrocer@Wilayah has serviced 30 locations in Kuala Lumpur with its moving market concept.

“Goods sold under the programme are around 5% to 20% cheaper than regular markets.

“To improve on these initiatives, I have been informed that the ministry will increase its efforts by reviewing aid receivers so that those eligible are not left out.

“I congratulate the ministry for continuing its service to the people while adhering to the new normal,” he said.

The Prime Minister also urged the public to celebrate the multiracial aspects of the country as a basis to unite Malaysians.

“This is the goal we have stated in the Wawasan Kemakmuran Bersama 2030,” he said.

2021-02-01
Previous Post: We Kept Our Affair And Work Separate – Haziq
Next Post: Cause of Loud Boom, Tremors in Sabah Remains a Mystery 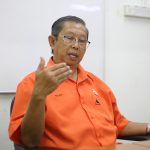